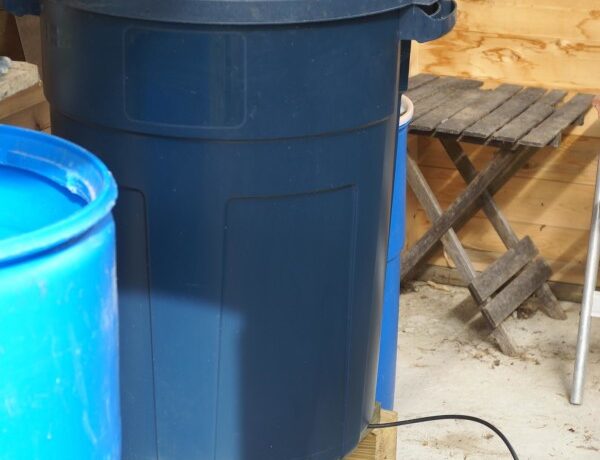 Fermentation is all the rage these days, with adventurous eaters and cooks trying their hand at making delicacies such as kimchi, kombucha, yogurt, sauerkraut and much more.

But fermented compost? Those words aren’t often heard together, but a dedicated homesteader from West Gardiner is trying to change that. Adam Tomash wants to tell other Mainers about the bokashi composting method, which he believes is a good solution to the problem of composting in the wintertime and works the rest of the year, too.

“It doesn’t really smell, and that’s the beauty of the system,” he said. “I think that if people are at all headed in the direction of being composters, it’ll certainly be interesting to them.”

Bokashi, a Japanese term meaning “fermented organic matter,” is an anaerobic fermentation process. In ordinary composting, kitchen scraps are mixed with leaves, sawdust and other high-carbon material. With time, air and water, the waste scraps break down into compost — rich, crumbly organic matter that adds nutrients back to the garden. But it can smell bad. And during the winter, trudging across snowy terrain to add kitchen scraps to a frozen compost pile can be a tiresome chore, and it can lure unwelcome pests to your yard.

But composting food scraps is important, especially at a time when about 43 percent of the waste Mainers send to landfills and incinerators is compostable, and Tomash wanted to try a new approach.

First he ventured into vermiculture, building worm bins in his basement and letting the earthworms eat his kitchen scraps. But that smelled unpleasant, he said, and because worms need air, he found that the bins became a good environment for fruit flies and fungus mats. Not things he wanted in his basement.

The bokashi method is different, he said. It’s a two-stage process, with the first stage fermenting or pickling kitchen scraps in a bucket and the second stage burying the fermented scraps in dirt or an outside compost pile to finish the job. It’s possible to purchase commercial bokashi composting kits, which includes a special container with a built-in tap and rice bran inoculated with “EM-1,” or effective microbes inoculant, a blend of yeasts, bacteria and more that was developed by a Japanese scientist.

But Tomash has worked out a way to modify the method to make it more affordable for home users.

“I actually bought a commercial bin,” he said. “I looked at the design of it. Jeez, I can make it a lot cheaper than that.”

Instead of special containers, he uses two 5-gallon buckets and drills holes through the bottom of one, just like a colander. The bucket with the drilled holes is used to hold the kitchen scraps, which generate a fair amount of liquid as they are fermenting. The second bucket holds the liquid that drains from the top bucket, Tomash said.

“You can dilute that liquid with water and water your houseplants or dispose of it in your septic system,” he said. “It’ll actually be beneficial to the system.”

Instead of rice bran, Tomash uses wheat bran, which is much more affordable and readily available in Maine, and purchases the effective microbes inoculant from Maine-based Fedco Seeds — it can also be found elsewhere on the internet. Because the inoculant is not cheap, Tomash makes more of it by fermenting it.

When all components are in place, he adds his kitchen scraps to the bucket with the holes and sprinkles the scraps with wheat bran, then drizzles about a pint of activated EM-1 on top of the bran. Over time, he repeats those steps to make a kind of compost lasagna, and when the bin is full he lets it rest for about two weeks. After that the fermentation process is complete, and he buries what’s leftover to be transformed into compost.

As with other fermentation projects, there is a slight odor, but it’s more like the acidic smell from winemaking than the putrid funk of decay, according to some bokashi users. Also, white mold may develop in the bokashi bucket, which is a normal result and is not harmful.

In the winter, Tomash uses 32-gallon plastic garbage cans kept in his basement instead of the 5-gallon buckets.

“This means no more trips to the outside compost pile during the cold months!” Tomash wrote in a how-to article published last winter in the Maine Organic Farmer and Gardener newspaper.

Tomash will lead a workshop about making a bokashi composting bucket from 9:30 a.m. to 12:30 p.m. Saturday, Oct. 8, at the Sheepscot General Store and Farm at 98 Townhouse Road in Whitefield. The event is sponsored by the Knox-Lincoln Soil and Water Conservation District, which requires pre-registration.

Hildy Ellis, the district coordinator, said she is hoping the bokashi system will help people compost more, even when it doesn’t seem convenient.

“The soil and water districts are all about conservation and building soil health,” she said. “We’re about preventing runoff and also reducing the waste stream. We know that there’s food in those bags that get left at the transfer station. Whatever we can do to reduce that is what we’re trying to do.”